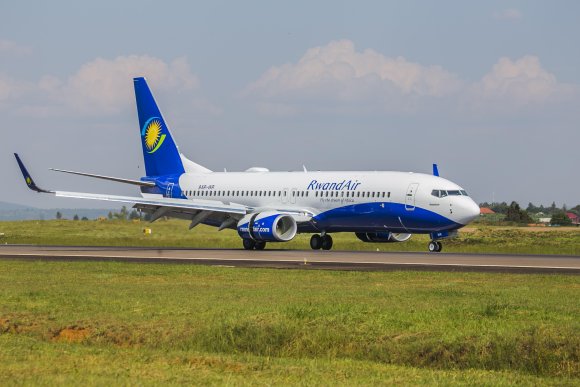 Rwanda’s flag-carrier RwandAir is launching a new route to Central African Republic’s capital Bangui, although its flights to London have been banned by the UK government.The new route to Bangui (BGF) will be tagged to the existing route from Kigali (KGL) to Douala (DLA) in Cameroon, and will be operated 2X-weekly on Wednesdays and Sundays using a two-class Boeing 737 aircraft. Flights start Feb. 3.“The launch of our new twice-weekly service to Bangui will open up a new lucrative market for RwandAir and help stimulate trade in the region and beyond Africa,” CEO Yvonne Manzi Makolo said.

“Thanks to RwandAir’s quick and easy connections via our Kigali hub, we believe this new route will strengthen the growing trade ties in Africa and bolster Rwanda’s growing economy.”

RwandAir has served DLA nonstop since September 2016 and operated 3X-weekly flights prior to the pandemic.

According to OAG Schedules Analyser, the carrier is the only airline providing direct service between Rwanda and Cameroon. The Rwanda-Central African Republic market is unserved nonstop.

Since August, RwandAir has gradually resumed commercial flights across its global network, including most of its African routes, as well as some long-haul destinations such as London Heathrow (LHR), Brussels (BRU) and Dubai (DXB).

However, the UK government on Jan. 28 suspended all flights from Rwanda because of worries over the spread of a more contagious COVID-19 variant first identified in South Africa. Flights from the United Arab Emirates and Burundi have also been blocked.

“This means people who have been in or transited through these countries will be denied entry, except British, Irish and third country nationals with residence rights who must self-isolate for ten days at home,” UK transport secretary Grant Shapps said.

Rwandair had been operating a 1X-weekly flight from KGL to LHR via BRU.